What is quantum physics? 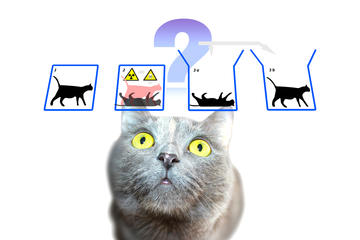 You may have heard of "Schrödinger's cat": Schrödinger was a physicist who theorised that if you were to lock a cat in a chamber along with a small amount of radioactive substance, which may or may not begin to decay (and thus trigger a poison to kill the cat), you wouldn't know if the cat was dead or alive until you opened the chamber.  Therefore, until you do, the cat is in a sense both dead and alive.

This thought experiment (don't worry, we don't do this in real life!) is often used to illustrate the key principles of what we call "quantum physics", science's description of the world at the atomic and subatomic level.  The term is often opposed to "classical physics", the description of the world at the ordinary, macroscopic level.  Yet quantum physics and classical physics differ in more than just their scale, as quantum physics routinely seems to defy our common-sense understanding of how the world works.

Whereas classical physics says that an object must be in just one determinate state at any given moment (e.g. a coin cannot land on both heads and tails), quantum physics says that a particle can be in multiple states at the same time - a phenomenon called "superposition".  This is what Schrödinger's cat analogy is intended to illustrate, although (as is often the case in science) theorists disagree on how we should interpret it.  A common interpretation is that we should express the superposition of states as a set of probabilities that only collapse into one value upon observation - thus why the cat is both dead and alive until we take a look.

Then there's the phenomenon of "entanglement": whereas classical physics says that two objects separated in space must have independent states or properties (e.g. one coin's landing on heads doesn't depend on another's landing on tails), quantum physics says that two particles can be "entangled" in such a way that you cannot describe the state of one independently of the other.  Performing an action on one will even affect the state of the other, regardless of how much space separates them.  Again, Schrödinger's cat analogy is sometimes used as an illustration of this, with some theorists interpreting the fate of the cat as entangled with the "observer state" i.e. whether or not we're looking. 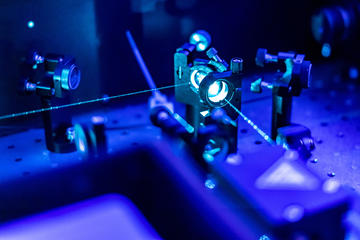 How does this relate to quantum computing?

Just as classical computing is based on classical physics, quantum computing is based on quantum physics: it exploits the "weirdness" of quantum physics - its probabilistic nature, and the phenomena of superposition and entanglement - in order to create machines far more powerful than the ones we're used to using in everyday life.  Whereas in a classical computer, a "bit" (the most basic unit of information) must have the value of either 0 or 1, a quantum bit (or "qubit") can be 0, 1, or both 0 and 1 at the same time.  Likewise, qubits can be entangled in such a way that they behave together as a group instead of individual units.  What this means is that quantum computers are not just faster than even the most advanced of classical computers, but work in a fundamentally different way - and are therefore capable of tackling complex tasks that aren't even conceivable for existing machines.  To recall Schrödinger's cat, a quantum computer is like a kennel full of highly-trained, well-behaved (and incredibly small!) cats: you give them a problem, close the door, and when you open it again they will have worked out the answer.

What is the current state of quantum computing?

Knowing how a quantum computer works in theory isn't enough to be able to build one in practice.  Qubits are notoriously fragile, difficult to control, and prone to errors ("noisy").  In other words, our quantum cats aren't as well-behaved as we'd like!  Connecting qubits together to build a machine requires an enormous engineering effort in order to provide stability and mitigate errors - and the more qubits we try to have, the harder it becomes.

Although a number of research groups and businesses around the world have already succeeded in building simple machines, the potential of these is limited because only a small number of qubits are doing actual computation: most are just holding information, and none can be spared for error correction.  A kind of trade-off arises between quantity and quality, power and reliability.  We believe that the best approach to solving this is a modular one (as is often the case in technology): rather than trying to build as many qubits as possible into one system, we are investigating how to interlink modules containing just a few qubits each, thereby allowing for scalability while minimising the potential for error.

This current era of quantum computing is often referred to as "noisy intermediate-scale quantum computing" (NISQC), and represents the near-term possibilities for quantum computers with between 50-100 qubits.  But these machines won't change the world: as well as advancing both hardware and software for NISQC approaches, we are also investigating the longer-term possibilities of a much larger "universal fault-tolerant quantum computer" (UFTQC), which would use logical qubits and quantum error correction.  In theory, such a machine could be programmed to do any task.  Through the previous Networked Quantum Information Technologies Hub (NQIT), which preceded QCS, we have successfully demonstrated all of the building blocks of a universal quantum computer.  The QCS Hub will aim to further this work.

How about the future of quantum computing?

As mentioned above, quantum computers will not only be faster than classical computers, but able to complete tasks far beyond their ken.  For example, in addition to searching large databases in a fraction of the time that classical computers can, quantum simulators will eventually allow scientists to develop new pharmaceuticals and materials virtually - rather than laboriously manufacturing them and then testing them in a lab.  This is because a quantum simulator will let us use one system of atoms to act like another, and thus study how new materials might behave before they even exist.

For more information on what the future might look like when quantum technologies are in our everyday lives, check out the Quantum City website - a collaboration between the four technology hubs (including QCS) within the UK National Quantum Technology Programme.

Visit the Quantum City website and find out how quantum computing, and other quantum technologies are going to change the way we live our lives. 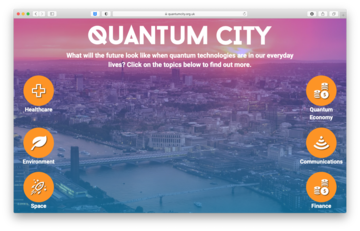 Download An Everyday Guide to Quantum Science, a free introduction to the key principles of quantum physics. 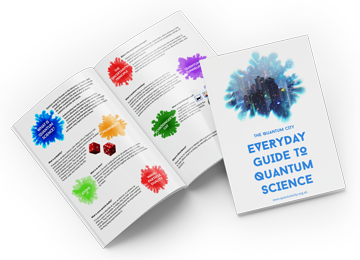 Watch this video, in which Stephen Fry explains some of the exciting potential of quantum computing and other quantum technologies.